The Neo Smartpen N2 moves your notes from paper to screen 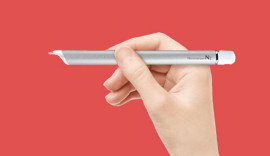 Not the first nor the last time we talk of a peripheral to these features, but the truth is that the creators of Neo Smartpen N2 have captured the interest of users: crowdfunding campaign on Kickstarter has raised six times the initial amount requested for the project.

This device is a pen that writes on paper, but whose lines are transferred directly to the screen of your smartphone, tablet, PC or laptop. Supports iOS, Android and Windows devices, and is capable of holding itself up to 1,000 pages of notes.

It may not feel comfortable taking notes on a tablet or laptop: if you prefer to take them with paper and pen, perhaps the Neo Smartpen N2 will facilitate the work of “pass clean” and organize these notes, as this product eg is able to work seamlessly with services like Evernote.

Written notes also can automatically switch to text -suponemos the accuracy and effectiveness of this OCR technology will depend writing each-, which further simplifies the process of moving to clean those notes, and MyScript technology built into this solution supports languages such as Spanish as well as English, Chinese or Japanese.

One of the key requirements-and perhaps one of the limitations of the producers is that we must use notebooks with paper specially prepared in which there are patterns that capture the location of the pen at all times. Although we can take notes on paper other traditional manner, they can not move to the screen. Fortunately, these pages are listed in the device memory, which then can be transferred to a storage service in the cloud or directly to the device where you want to end up storing them.