Project Ara, the phone that could revolutionize the mobile industry 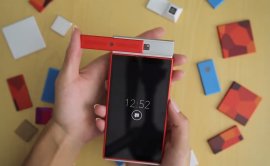 They say that we are never satisfied and talking cell phone, safe on more than one occasion we wish that our phone has spare one or more telephones. It would do you good to have a mobile with camera of Nokia imagine, the battery of a Sony Ericsson and the level of customization of a Moto X? Part of that fantasy could become reality with Ara Project.

The draft modular smartphone has been brewing for several months in the offices of Google and then made its appearance in Google I / O, the development team has advanced a stage in the design process with the arrival of the prototype Spiral 2 . a few days ago we had opportunity to talk with the project manager, Paul Eremenko, by a hangout at the offices of Google Mexico.

Paul tells us that bugs have been resolved earlier prototype and the new like Spiral known to iterations in the process of development is the milestone (or milestone) most recent. This prototype will demonstrate the way the modules (on device network) are connected; power system that allows each module to provide or consume energy and finally that all this progress can be implemented in industrial design that was initially raised.

This new phase also coincides with the arrival of new partners among which, Quanta Computer, a Taiwanese company that designs and manufactures hardware and notebooks to large companies like Apple, HP, Dell and other brands.

While this is a breakthrough in the project must understand that we speak of a prototype and is not yet ready to get in the hands of consumers. The good news is that Spiral 2 will be ready to start testing phone as a wireless cellular network, or environmental drop tests, ie, the beginning of what would be a phone.

Will the market be ready?

Something that intrigues me is whether the market or the manufacturer will be ready for Ara Project, after all break paradigms and change our consumption habits thanks to interchangeable modules. Come on, if things go as planned, we speak of a period longer than two or three years we give our lives smartphone.

At this Paul says that while there is a group of people for which mean a challenge in the way they do business, there is another even bigger they are open to something new. According to research made by the design team in hardware companies there is a desire to innovate faster in their development cycles, something that can not experience with current industry processes.

Skip to table the issue of battery innovation in the components sometimes have to wait to be certified and face cycles that encourage innovation. Paul also tells me of a microfluidic sensor that would measure the blood or saliva, and that puts a smile on my face because diabetes is a common theme in my family. Manufacturers of these sensors do not have to worry about the external design or interaction with the operating system since Ara be responsible to fix it.

Crucial part of the project is the way in which the modules are implemented and communicate. Ara run under Android, but a modified version that enable change each of the modules “hot”, without turning off the phone. The development team has made significant progress in this area and it is planned that next year we will have the first model ready to get in the hands of the consumer.

Google will hold a conference Ara Project developers from January 14, 2015 in which it expects to complete the Spiral 2 to put in the hands of developers.