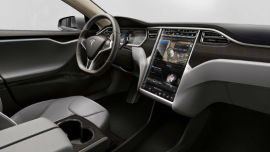 Imagine driving up to a gas station, stopping in front of a pump, pulling the hose close to the fuel tank and having the hatch pop open automatically—magic! That’s exactly what happens with the Tesla Model S. Except it’s not a gas station and not a fuel tank that’s popping opening. The fully electric car’s charging outlet has an RFID tag embedded so it can recognize when a charging plug is pulled up to the car.

Tesla may be changing the car industry, flipping gas guzzling vehicles on their heads, but the new car company is also head deep implementing some of the newest technology into its most popular vehicle. From a 17-inch touchscreen display which handles all adjustments, to cellular connectivity which keeps the car’s software up to date, there’s a lot of technology to appreciate.

Those turned on by raw power and racing through speed limits will love Tesla’s thirst for the open road, but it’s the technology and attention to detail draped over every aspect of the Model S which should make it any gadget lover’s ultimate dream as well. The car industry is so riddled with rules, restrictions, and a slow process, that even the coolest new features are severely outdated. It’s nice to see something new grace a dashboard once in a while. 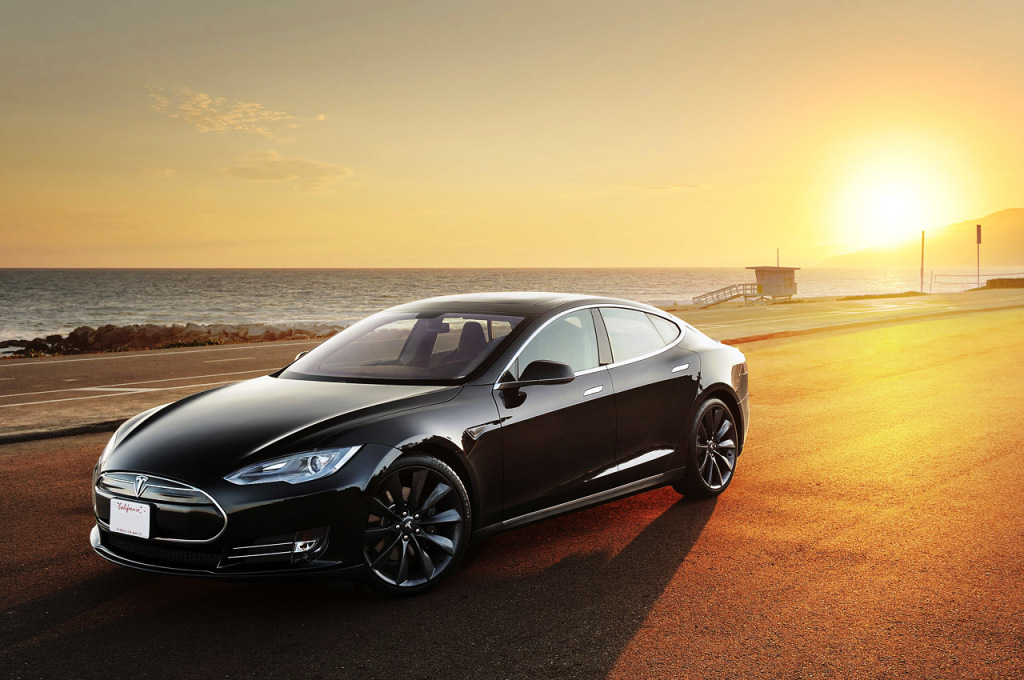 It’s your lucky day, you were just handed the key to a new Tesla Model S and have been told to go take it for a drive. The first thing you do is give it a once over and check out the outside of the car.

If you look closely at the top of the windshield you’ll see a couple of dots where the rear-view mirror connects. That’s a camera and forward looking radar. These are new additions to support Tesla’s upcoming autopilot features which give the car semi-autonomous driving abilities. The sensor in the windshield will see to the front of the hood where there’s another radar sensor in the front bumper.

The camera is for street sign spotting, lane recognition, and detecting other items in the road. As you pass speed limit signs the car will read those and display the posted speed limit in the dashboard, right under your current cruising speed. It really takes the wind out of the sails trying to tell the police offer that you didn’t know what the speed limit was as he pulls you over for speeding.

In the future, when the autopilot update is in all capable models, the car will have the ability to actually speed up or slow itself down automatically based on the speed limit sign recognition. It will also be able to stay inside your lane, no hands needed.

Around the entire vehicle, you’ll find ultrasonic sonar sensors which provide a complete 360-degree buffer able to detect other cars. These are similar to ones you’ll find on other cars—usually only found on the rear bumper for backup assistance.

If you pop open the hood on your trip around the Model S, you won’t find a killer, beefy, engine, you’ll find a “frunk”. The front truck, or frunk, is a spacious storage space provided by the small electric engine being housed in the rear of the car. Having a large empty crumple zone is also one of the things that makes the car extremely safe.

Under the front truck, on the wheels, you’ll find the car’s regenerative breaking mechanics. On a traditional car force is applied to brake. You may have even seen puffs of smoke when someone braked too quickly. This is the excess friction that’s essentially been wasted. Tesla’s cars capture the energy used to brake and put that back into system as little bits of additional battery power.

Inside, on the car’s dashboard you’ll notice a red and green line while driving. The red is how much energy the car is using, but when you begin to brake the line slides to green as, not only less energy is being used, but some is even pumped back into the system.

If you head to the back of the Model S you’ll find the back trunk, just called the truck, like almost every other car in existence. The motor is in the back, but it doesn’t take up the space needed for the truck since it’s really small compared to a standard combustion engine. It actually lives right on the frame underneath.

The electric motor is relatively small, but still incredibly powerful. There are different motors on different models, but the standard 85 kWh Model S uses a three phase, four pole AC induction motor with copper rotor. It has 380 horse power with a 0-60 rating of 5.4 seconds.

The battery is underneath the car as well and takes up most of space. The entire battery is encased in a metal frame which both protects it and makes it very quick to swap with a new battery. Tesla has touted its ability to swap a car’s battery in only 90 seconds.

Finally ready to enter the car you notice there’s no key slots or door handles, even more, you’re not even holding a standard key, but a miniature version of a Model S. The electronic key fob will unlock the doors when you get close, it will also cause the door handles to pop out so they’re no longer flush with the car.

Even though the tiny Model S you’re holding in your hand is a bit of a novelty, it’s also cleverly constructed. Different areas of the fob can be pressed to activate those parts of the car. For instance, pressing on the trunk will open the car’s trunk. Pressing the hood will open the front trunk, and so on. 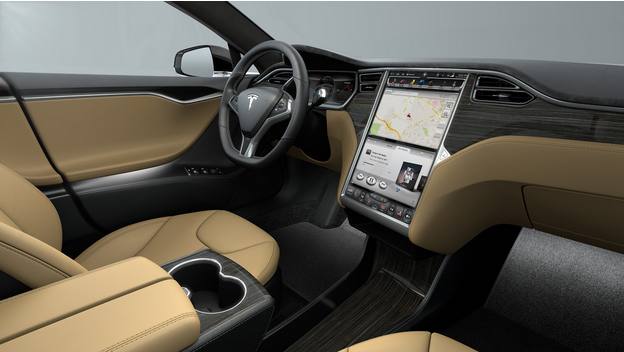 Now, getting in the Model S, you sit down and look around as you get ready to drive off. The first thing you’ll probably notice is the 17-inch touchscreen center console. This handles almost all the car’s settings and adjustments. Not only does it make other car’s touchscreen controls look small, it even makes an iPad and other tablets look small.

There’s an Nvidia Tegra 3 processor powering the large console which includes six main sections across the top. The first is music where you’ll find AM, FM, and satellite, but there’s also Slacker Internet radio which uses the car’s built in cellular connectivity. There’s of course also voice commands to find the music you’re looking for.

The next section is navigation which uses Google maps and can even do live traffic overlays. A dedicated GPS unit is on board as well if the car suddenly doesn’t have a 3G network connection anymore. After that there’s an energy tab which provides lots of real-time charts and data to show how the car is using the battery energy. The speed and way you drive will affect how much distance each charge will last.

There’s a built in web browser which you can set to take up the entire screen to browse the web. It doesn’t support Flash, however. The camera section allows access to the car’s built in rear HD camera which can be toggled on at any point and left on if you’re constantly curious about what’s happening behind you. Last but not least is a phone tab which will download and store contacts from any smart phone.

The dashboard in front of the steering wheel is also a large screen, completely customizable. Both the left and right sides can be changed to display anything from your music to turn-by-turn direction. A rotary knob on the steering wheel will let you adjust items on the screen without taking your hands off the wheel.

If you opt for the option, you can also control the car’s suspension from the main console. Since the Model S rides a little low, there’s the ability to raise and lower the car for speed bumps, rough roads, or pesky driveways. Better yet, the smart suspension is connected to GPS and will remember the the moves you made, and adjust in those same locations again automatically.

As you lean back and take it all in, you should hit play and give the 12 speakers (including an 8-inch sub) a listen. Streaming Internet radio might not provide the highest fidelity, but other music choices still have the opportunity to shine.

There’s no key slot, obviously, so the fob just needs to be inside the car for it to turn on. Since it’s an electric vehicle, there’s no engine noise so it can be a little alarming that you only need to have the key inside the car and then apply your foot to the break for everything to be on and ready to go. 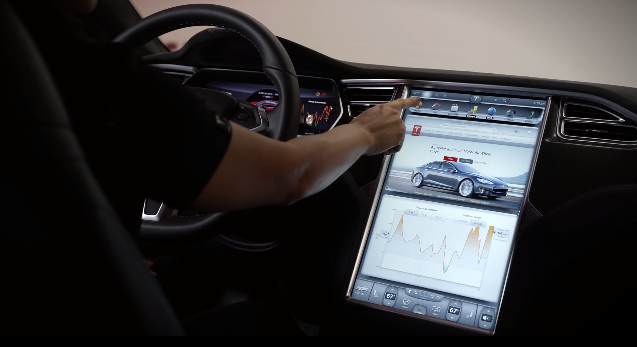 Most of the Model S’s killer features are evergreen. They don’t get outdated or stale because of the company’s ability to wirelessly provide software updates, just like your mobile phone.

A great example of this is the electric car creep feature. In a standard combustion engine, there’s constant forward movement unless the brake is applied. It’s probably something anyone who’s been driving for any amount of time doesn’t even notice and takes for granted. In an electric vehicle, however, you have to intentionally tell it to go, by pressing the accelerator, to get the car to move, otherwise it stays stationary.

Some people actually hated not having the slight rolling creep with no acceleration applied. It was a minor aspect that made it a lot harder to get used to driving the Model S. But because of the ability to apply updates to the system and how the car works, there’s now a setting which will allow you to turn on and off the creep feature with the touch of a button. 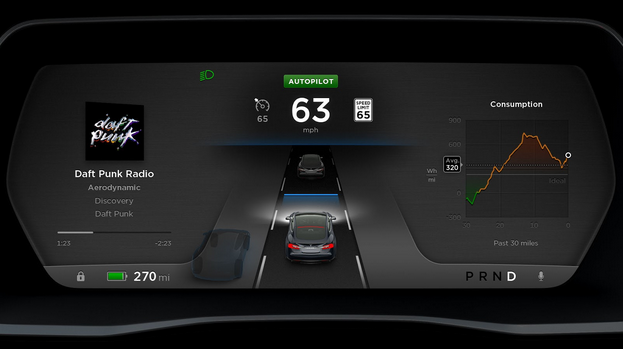 Having the car so reliant on the ability to get critical and miscellaneous software updates or patches means Internet access is vitally important. That’s part of the reason every car comes with integrated cellular wireless connectivity.

There’s also a Tesla app for mobile devices. With the app from your phone you can check the charging status, heat or cool the car before driving, locate and track the car driving in real-time, and also flash the lights or honk the horn remotely.

No smog check, no oil changes, and less motor parts means less trips to the deanship or mechanic. Tesla recommends only a single service check up each year. The best part is that they can come to you and provide a loaner Tesla while they take it get checked out. The app comes in handy here to keep an eye on your vehicle as someone else takes it in for service.

Posted on January 14, 2015
By SilveryfrogGadgets New TechnologyLeave a comment