The smallest Mini vehicle is a scooter, electric and folding: Citysurfer 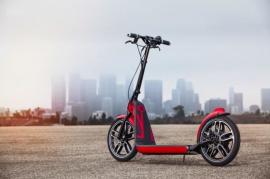 We have already seen a few folding bikes, longboards, even a scooter, all powered by electricity, but the first time we see the idea as well resolved on a scooter. That is the proposal of Mini with Citysurfer.
The vehicle weighs 18 kilos Mini and may lead as far as 25 kilometers – depending on the route and use may drop to 15 kilometers -. It has been presented today at the Hall of Los Angeles, with his innovations in the world of cars.
Course has been designed to fit – fold – in the small trunk of a Mini, you can even load it through the outlet available (12 volts).

This-electric-folding scooter can practically act as a scooter that will allow us to move around the city without emissions, no parking problems. The maximum speed you can get is 25 kilometers per hour.

The City Surfer handlebar is adjustable in height to accommodate our needs, has a stand to place our smartphone, from which we can recharge. Draws attention to the care of the wheels, generously sized tires and disc brakes – Magura – on both axes.

The lithium battery is housed and protected at the bottom, below where you put your feet. By the time we were without it, the system is disarmed and released, can allow ourselves to move forward with the momentum of our legs.

For those tempted to buy one senses have, commenting that now is a prototype, proof beyond conceptual who have taken the show to meet the interest of the general public.
With existing traffic congestion in large nuclei, and the desire of people to try new means of transport, we are surprised not to see as small startups and large companies agree to create this type of vehicle, which will end populating our cities, yes with some legislation through.

One thought on “The smallest Mini vehicle is a scooter, electric and folding: Citysurfer”